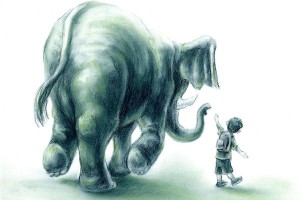 Una-Nana is an African folktale and a Zulu fable. Stories in Zulu are often derived from proverbs. Proverbs are generally pieces of advice shaped by historical experiences, events and behavioural observations . This story originates from a proverb “Unanana-bosele”, which means an obstinate person as stubborn as a frog, never to give up under any situation. The name of the woman “Unanana” likens her to the frog in the Zulu proverb. Inspite of being a widow Unanana builds her own house and brings up her two children with faith and belief. This Zulu fable is also a part of “Women Writing  Africa” project documenting African women’s voices and unravelling the oral and written traditions, and unfolding the history of the African continent through a woman’s eyes.

Usually in African stories the woman or the elephant are the main characters around which the stories evolve. In this folktale, a lone mother plays a protagonist fighting the odds of the forest and the big, wicked elephant. It is interesting to know the cultural differences between the Indian subcontinent and the African continent regarding the dispositions or personalities of animals. For example, in India the elephant is equated to a large behemoth with a godly demeanour or as many call it “the gentle giant”. However, in African context, elephants are usually depicted as the villain of the story. This maybe to show that a woman though conventionally less physically strong than a man, can confront and triumph over a big and difficult obstacle. This brings us to further explore stories based in India mainly about women. It would be interesting to question the relationships depicted in stories about women between their surroundings – natural and manmade. One could also question the choice of a woman in place of a man in this story. This leads us to understand that folktales many eons old had a sense of rebellion despite an individual’s weak demeanour against odd circumstances. Somewhere we find traces of feminism arising from such timeless fables.

The story is about Una- Nana, a widow and mother of two plump and beautiful children, who lived in an impoverished shack near a dense vegetation. One day as she ventures into the forest to collect wood, her children set out playing pebbles with their elder cousin. While playing they are abruptly visited by a baboon,  gazelle and  leopard; all of them in awe of the beauty of Una- Nana’s two children. Then suddenly they hear a huge voice bellowing at the cousin asking about the two beautiful children, which scares Una-Nana’s children into hiding. The elephant then swallows the two children and returns back to the woods. The scared cousin then narrates the incident to Una-Nana which leaves her heartbroken. However she is still hopeful to find the elephant and free her children and embarks on a tireless journey with a cooked pot of beans and a knife. The story is about her relentless, selfless quest to free her children from the one tusk elephant. Why does she carry a cooked pot of beans along with a knife? Are the baboon, gazelle and the leopard representations of persons in the daily society surrounding children and women? Would Una – nana manage to free her children despite going hungry through her quest? Would her success be rewarding? And does she venture for the ultimate rewards for her trials or does she venture out with humanity expecting nothing in return? Do we venture out to help someone expecting something in return?