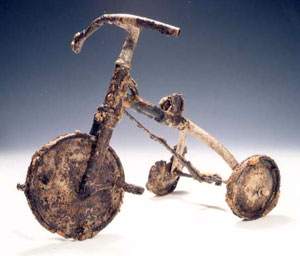 SShin’s story helps keep the dream of peace alive for children around the world.
Kodama, himself a survivor of the bombing of Hiroshima, narrates the story from the point of view of Shin’s father, Nobuo Tetsutani (鉄谷信男 Tetsutani Nobuo). Shinichi is playing on his tricycle when the bomb is detonated. Nobuo finds the barely alive Shin still holding onto the tricycle’s handlebars and trapped under the rubble of their destroyed home. Nobuo’s efforts to save his son are in vain and Shin dies that evening. Nobuo buries Shin with his tricycle.

Forty years later, Nobuo exhumes Shin and his two sisters, who also died in the bombing, in order to give them a proper burial at a cemetery. While digging everything up, a pipe was found, believed to be a part of the tricycle Shinichi had owned. Not long after, they found skeletal remains of two human hands; the remains were identified as Shinichi and his local friend, Kimiko, who had died together with him, holding his hand. Nobuo donated the tricycle to the Hiroshima Peace Museum, where it is currently on display.