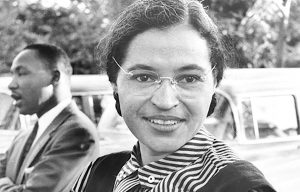 In 1955 Montgomery, Alabama, a 42 year old black American woman named Rosa Parks was headed back home from work in a bus. As a result of segregation in the state of Alabama, blacks were only allowed to sit at the back of the bus and Mrs. Parks complied with the law and sat in a seat allotted to coloured people. After a few stops, a white man entered the bus and saw that all seats reserved for whites were occupied. So he asked Parks and others sitting in the coloured section to vacate their seats. Rosa Parks stood by her right and refused, politely and firmly. As a result of her lawful refusal to the white man, she was arrested and put behind bars. This sparked off one of the most important events in the American civil rights movement – the Montgomery bus boycott which lasted for 381 days before the government conceded and removed segregation in public transport. The movement, led by reverend Martin Luther King became a beacon for change through peaceful protests in America.

Listen to the story of this African- American woman whose dignified courage and commitment to justice inspired local leaders to spark off a revolution.

The practice of slavery in America, where black people of African and Caribbean origin were sold for forced labour as the property of white farmers and land owners was abolished by Abraham Lincoln in 1865. Yet, little had changed for black lives in terms of legal, professional and social equality. In some US states, blacks were not allowed to use the same public amenities, voting rights were curbed, interracial marriages were illegal and much more. To end this segregation and discrimination, a civil rights movement was waged across US which resulted in reforms and equal laws for all citizens. To read more on the American Civil Rights movement go here.