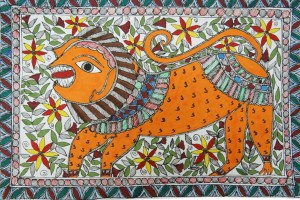 Chitranga was a dog, who lived in a certain town that was affected by a famine.  People had no food to eat, and they cared not to give any to the dogs or cattle or any animal. Due to the lack of food, along with other animals, the dogs were starving. Some of them even died.

Chitranga was not able to bear the hunger and realizing that the place did not offer conditions to live, he decided to leave for a foreign land in search of food and better conditions.

After traveling a long distance, he came to a certain town. I saw a door open in one of the houses due to the negligence of a rich lady householder. He went into the house and found abundant food. He had not eaten for a long time and ate to his heart’s content. Then he thought of leaving silently.

No sooner had he come out of the house, he was spotted by other dogs of the neighborhood. The realized he did not belong to their community and chased him. Since he had his stomach full, he could not run fast, and they bit him all over with their sharp teeth.

He somehow escaped, and thought, “It is better to live in peace in one’s own country, be it affected by famine. I will rather return home.”

When he returned to his country, the starving dogs there were curious. His friends and relatives gathered around him to enquire about his findings, “Please tell us about the foreign country you visited. How is it like? How are the people? Is there plenty of food?”

The dog said, “O friends and relatives! What can I say? In the foreign country, the women are careless. They leave doors and windows open. There is lots of food to eat. But, your own kith and kin will not show any sympathy. They will torment you to death.”

The wise indeed say:
The outsiders may tolerate your lapses but not your own kith and kin.