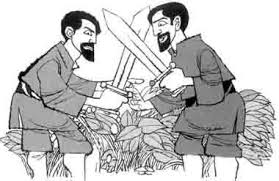 In a distant land called Chichibaba there lived two brothers. One was called Guruk and the other was called Turuk. They loved each other very much. The only thing they used to fight about was that Guruk was right handed and Turuk was left handed. And then!

In a distant land called Chichibaba there lived two brothers.

Guruk and Turuk became adults and became rulers. They still argued and quarreled but loved each other, nonetheless. There were also other right-handed and left-handed people in the land who fought among themselves when Guruk and Turuk fought each other.

One day, their fight went on for a while and a wicked man called Tomtom, who was visiting them from a distant land said, “You would better live apart.” And so their land was divided and a wall was raised, separating the two brothers.

Tomtom used to visit Chinchin and Chinchun from time to time.

“Be careful about Turuk,” Tomtom would tell Guruk. “I shall give you a new right-handed catapult to protect yourself,” and he took a lot of money from Guruk for the catapult that he sold him.

“Be careful of Guruk,” Tomtom told Turuk. “I shall give you a new left-handed catapult to protect yourself,” and he collected a lot of money from Turuk for the catapult that he sold him.

As we all know, there is no difference between a right-handed catapult and a left-handed catapult. They are exactly the same. The brothers were proud of their respective catapults and lost no time in showing them off to each other.

There lived in another country a man called Samsum, who made weapons. Samsun sold Guruk a bigger catapult that could be used to throw bigger stones. These stones could break houses when they fell on them.

Guruk was very pleased. He sat down happily with his hookah and smoked. A gurgling song came out of the hookah: “Guruk, Guruk, Guruk, Turuk is a kuruk.” By ‘kuruk’ the hookah meant ‘crook”.

Turuk heard the song. He was very upset and went to Tomtom, who had developed a new weapon. He called it a cannon. You could stuff some gunpowder into it and place a huge iron ball inside. As soon as you set fire to the powder, it would explode. The iron ball could go a long distance. “It can destroy many houses and kill many people,” said Tomtom. Turuk paid Tomtom a lot of money and bought the cannon.

Turuk placed the cannon near the wall that separated his land from Guruk’s land and pointed it towards Guruk’s house. He sang loudly so that Guruk could hear his song: “I am the king, I am the king, I have a cannon and Guruk has a sling.”

Guruk heard the song. He did not know what a cannon was. He went to Samsum who gave Guruk a bigger cannon and told him how it could destroy houses and human beings. Guruk paid Samsum a lot of money and brought the cannon home.

And so it went. On and on. Guruk and Turuk, the right-handed and left-handed brothers who loved each other once, hated each other now.

The wall that separated their lands had cannons and guns and all sorts of weapons pointing at each other. Right-handed soldiers and left-handed soldiers wearing uniforms guarded the wall on either side.

A lot of money had to be spent to buy weapons and uniforms and to pay the soldiers. Both Guruk and Turuk became poorer and poorer as Tomtom and Samsum became richer and richer.

The wall that separated Chinchin and Chinchun had broken at a certain place and there was a big hole. Children from one side would go to the other side and play when the elders were not looking.

Guruk told his people, “When I drop this bomb on Chinchun, everyone will melt like butter and die instantly.” “Hurrah!” said the people of Chinchin.

Turuk told his people, “When I drop this bomb on Chinchin, everything will melt. Everyone will die and there will not be any of these right-handed people to threaten us anymore. For years and years not a blade of grass will grow there.” “Hurrah!” cried the people of Chinchun.

It was the first time they had met and seen each other for many years. As they kept looking, they remembered those days when they lived together and loved each other. “What have we done to ourselves?” they cried out and tears welled up in their eyes. Guruk and Turuk stretched out both their hands and embraced each other. “We shall destroy all our weapons and bombs and will live as we used to live before,” they said.

The children could not believe what they saw. At first they were scared but then they began to laugh. People from both sides joined them and everyone was happy. The children made a ring and they began to sing and dance. The elders laughed and cried, till their tears all dried, and love made hatred flee.