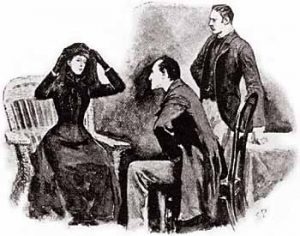 So in the 1980s, ex-IIT-ians of the Dramatech theatre club put together a Hindi adaptation of a Sherlock Holmes’ short story, The Adventure of the Speckled Bamd. Ravi Raj Sagar directed and recreated the story in an Indian context. The names changed and so did the locations, but the spirit of the story remained the same.

Meeta Kanwar met Inspector Sherman to explain her strange misgivings about Dr. Ghoshal “Uncle” who lived with her and her sister. It turned out that the man they call “Uncle” was their mother’s second husband. When Dr. Ghoshal’s behaviour became stranger and stranger the sisters began to feel unsafe. Would Inspector Sherman be able to help them?