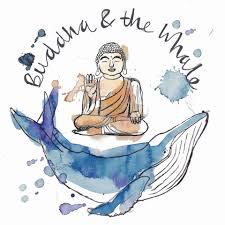 It is a known fact that the Blue Whale is the largest mammal in the world. But is it bigger than the Daibutsu – the statue of the Buddha at Kamakura?

This is a Japanese folktale and as is true for all folktales, the story changes slightly with every teller and every telling. Here is a version of the story from William E. Griffis book, Fairy Tales of Old Japan.

From heels to toes, man’s two feet are of the same length and so for all the animal creation. One would think that in measuring metal and for taking the length of cloth, the feet on the yard stick would be alike; but no! in Japan they are not. When you go out shopping and buy cloth or soft goods, you will find the “whale measure” used. Do you go to the lumber or stone yard, or see anything hard measured, then the man pulls out his “metal foot” and marks off the length. There are two inches of difference, but why?

We must go to Kamakura to find out.

The old Buddha image that has stood out in the rain for seven hundred years could tell you, were it to open its metal lips. It is about the tallest piece of bronze in the world, with eyes of pure gold, and a great silver boss on its forehead, that looks like the full moon, and it has eight hundred big curls on its head. These are the snails that kindly coiled themselves on Buddha’s [148] head when by thinking too much, in the hot sun of India, he might have been sunstruck.

When the great general, Yoritomo, gave peace to Japan after long wars, he laid out the city of Kamakura. To attract pilgrims to the new capital, he ordered the greatest image of Buddha in all Japan to be reared in his capital. When finished, the sitting figure rose fifty feet in the air. It was ninety-seven feet in circumference, the length of its face was eight feet, and the width from ear to ear seventeen feet, and from knee to knee it measured twelve yards. As for the thumbs, they were three feet round. Over it was built a lordly temple and the columns of camphor wood were covered with gold.

Such a colossal image quickly became the talk of people throughout the empire. Thousands of pilgrims started out to see the wonder, until the roads in summer were white with the pious folk of scrip and staff. Even the sailors on the sea chatted concerning it and the fishermen as they plied their nets, made it the subject of their talk. All agreed that the idol of Kamakura was the biggest thing in earth, air, or ocean.

Now there was a great white Whale living in the Northern Sea who prided himself on [149] being the biggest thing in water and far ahead of any living being on the land. At first he laughed at the idea that puny men had made an image in their own shape, that could compete with him in size. He would not believe it, but when he heard of the great pilgrimages and how the coffers of the priests were being filled with the money of the admiring visitors, he was vexed and worried. Day by day the fleets of ships multiplied on the ocean, sailing right over his head. They were loaded with people bent on seeing the golden eyes of Buddha. All the smaller whales and the fish of every fin reported to him that people were talking of nothing else. Every one praised the beauty and extolled the vastness of this greatest wonder in the Everlasting Country of Peaceful Shores.

The big Whale almost went crazy to think of being smaller than an image which men had made. Fretting and fuming, he thrashed around with his tail, making a great commotion, and rose up to the surface to blow twice as often as usual. Jealous, indignant, and angry by turns, he seemed a totally different creature from the polite whale of other days. All the fishes gave him a wide berth. Lonely [150] and miserable, he grew thin with worry. At last, unable to sleep or to eat, he called to him the Shark and questioned him.

“Is it possible that a little man can raise a mountain of copper and make it look like himself?” asked his White Majesty.

“Well, Sire, what one man could not do, thousands of them together might succeed in doing. I myself should like to see the great Buddha they are talking about.”

“Go then,” said the white Whale, “to the Southern Sea and find out whether this famous idol is as big as I am. Be sure to bring me a true account.”

Off started the Shark, and after days and nights of swimming arrived off the shore. Alas, the great image was half a mile inland and sharks cannot walk! He swam around carefully to find some creature with wings or legs to act as his messenger to go and measure the mighty image. Espying a junk lying at anchor near the beach he swam cautiously near. It was a hot day and early in the afternoon, and every man Jack on board was sound asleep, for this was napping time. The Shark soon lost all anxiety concerning harpoons, and fear of [151] having his flesh cut up and put on sale in the fish-shops next day But what of his messenger?

Happily a Rat, lured out from below decks by the quiet, was running along the low bulwark. It had never been spoken kindly to before and was quite pleased when the Shark—with gentle voice, so as not to arouse the sailors—cried out, as he poked his nose out of the water, “Mr. Rat, I want you to help me. Will you do it?”

The Rat was tickled beyond measure to be thus addressed, and wondered how he could be so useful to so big a fish. He kept back a good distance, however, for he had heard of Cat-fish and did not want to run the risk of being gobbled up. Besides he had listened to the sailors as they talked about people with at “Cat’s voice” meaning those who knew how o coax, or flatter. So he was wary.

Then in a low tone the Shark told the Rat what he had come for. It was an honour to serve the lord Whale as the biggest thing in the world, and it might save his lordship’s life, or at least his health, to know the exact facts as to the size of the famous idol.

“Willingly,” said the Rat, feeling highly honored to serve the lord of the ocean and his prime minister.

So, at the first opportunity, the Rat got ashore. He kept his eyes open for fear of Cats, which the Japanese call rat-killers. He ran as fast as he could to the temple which then enclosed the image. Once safely inside, he took his breath, while thinking what next to do.

Truth to tell, the Rat was himself amazed at the size of the image. “A mountain of metal, sure enough,” said he. But how should he measure so vast an object? While thinking over the matter, the incense nearly made him sneeze. This he feared to do, lest some Puss should be about and pounce on him. Suddenly a brilliant thought struck him. He walked around the image and counting his steps, found he made five thousand paces. Then he ran back to his home on a junk, crawled down the cable close to the anchor and told the Shark all about what he had seen and gave the measurement.

Heartily thanking his four-legged friend, the Shark was off with a splash that actually woke [153] up the sailors from their naps. One of them ran for a harpoon, but it was too late. Mr. Shark was off. Arriving in that part of the Northern Sea where the Whale was blowing, he told his story. All the reports of the idol’s size were true and the circumference of its pedestal was five thousand feet.

Frantic with jealousy and unable to believe the story, the Whale determined to see for himself. Putting on his magic boots, which enabled him to travel overland, he reached the temple at Kamakura at night, when all men were abed, and knocked at the door.

“Come in,” sounded the Buddha’s voice like the boom of a bell.

“I cannot,” groaned the Whale.

“Because I am far too large.”

“I am the great white Whale of the Northern Sea.”

“I want to see if you are bigger than I am. I cannot get in to you, so please come out to me.”

Thus respectfully addressed, the idol stepped [154] off his pedestal, and presented himself outside. The Whale was so overpowered that he trembled and knocked his head on the earth in profound respect. He now believed that what he had heard was almost true. On the other hand, the Buddha was astounded at the Whale’s prodigious bulk.

By this time the chief priest and guardian of the temple was awake and up. He was nearly frightened out of his senses to find the pedestal empty, But hearing the conversation, and being invited by both the idol and the Whale to take their measure, he seized his rosary and began to measure. Each watched the other with a jealous eye, but the Whale, to his intense satisfaction, found that he was two inches longer and taller than his rival.

That settled it. Without even once thanking the idol or the priest for the trouble he had given them, he flippered off, slid into the water and was soon spouting in triumph in the great Northern Sea. The idol quietly returned to his pedestal, and as for the priest, when he told his story next day, both his brethren and the people declared it must have been a dream.

Nevertheless the man in the dry-goods store [155] and the dealer in wood and iron settled their own long standing quarrel as to what was a foot and agreed to differ. To this day the “whale foot” is two inches longer than the “metal foot.”