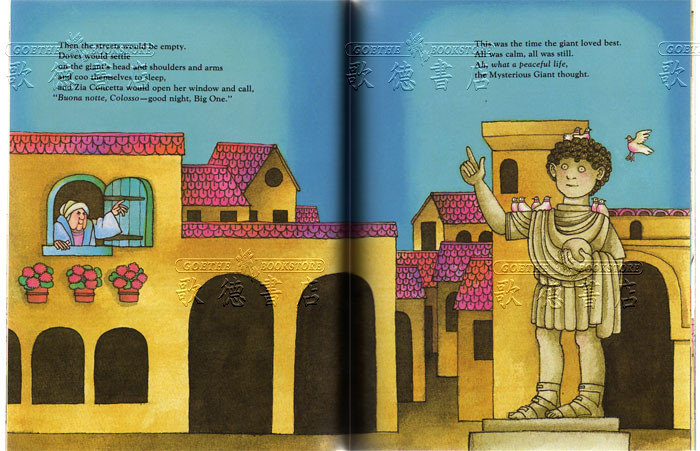 IIn the town of Barletta, in front of the Church of San Sepolcro, stood a huge statue.  No one knew where it had come from or when.  The Mysterious Giant – for that is what the people called the statue – had always been there as long as anyone could remember.  Even Zia Concetta.
An Italian Folktale
Written by: Tomie De Paola

In the town of Barletta, in front of the Church of San Sepolcro, stood a huge statue.  No one knew where it had come from or when. The Mysterious Giant – for that is what the people called the statue – had always been there as long as anyone could remember.  Even Zia Concetta. Zia Concetta was the oldest one in all of Barletta.  She lived right across the square from the giant statue.  “Every day, every night, for my whole lifetime, I’ve looked out the window and there he is,” she would say. Good weather and bad, the Mysterious Giant stood there.  The people of Barletta loved having the statue in their town. In the early morning, right before the sun came up, the sisters from the convent and other townspeople came to the church for Holy Mass.  They always greeted the giant with a nod or a smile.
The people on the way to market always hailed the giant and asked that he give them good luck to sell all their goods or to get a good bargain.
All day long the children played around his legs, and the doves flew around his head.  The young boys would sit on his big feet and tell jokes.
A little later the older boys would sit on the giant’s feet to watch the older girls walk by.  And at night, lovers would steal kisses in the giant’s shadow.
Then the streets would be empty.  Doves would settle on the giant’s head and shoulders and arms and coo themselves to sleep, and Zia Concetta would open her window and call, “Buona notte, Colosso – good night, Big One.”
This was the time the giant loved best.  All was calm, all was still.  Ah, what a peaceful life, the Mysterious Giant thought.
But one day this peaceful life was over.  Word had reached the town that an army of a thousand men was destroying all the towns and cities along the lower Adriatic coast.  And this army was heading straight for Barletta.
The townspeople ran through the streets in panic.  No one in Barletta was ready for an army coming to destroy them.  They had no generals, no captains.  Why, they didn’t even have any soldiers!
Shouts and screams echoed off the buildings.  The night was lit by torches.  All the peace and quiet was gone.  No doves came to settle on the Mysterious Giant’s shoulders, and Zia Concetta didn’t call “Buona notte” from her window.  The Mysterious Giant didn’t like this at all.

“Colosso,” she said to the huge statue, “as long as I can remember you have stood here looking over this town and its people.  Barletta loves you and I know you love Barletta.  I wish you could do something to save us from this army.  With your size, I’m sure you could frighten them away.  Why don’t you hop down from your pedestal?”
And that’s just what the Mysterious Giant did!
“Now . . . “ said Zia Conceta.  They put their heads together and came up with an idea.  “And a good one, too,” said Zia Concetta.
The Mysterious Giant climbed back and stood still.  “People of Barletta,” Zia Concetta called.  “Come quickly!  Great news . . . un miracolo – a miracle – our giant is going to save us.  Come!”

The people of Bartella gathered around.  “Friends,” Zia Concetta said, “our giant will go to meet this army himself!  All you have to do is three things.  First, bring me the biggest onion you can find.  Second, stay completely out of sight.  Hide under the bed, hide in the closet, hide in the cellar, hide in the attic, but stay out of sight.  And third – don’t ask any questions!  Have faith in our Mysterious Giant.
Someone quickly brought an onion.  “Now, hide!” shouted Zia Concetta, and everyone scurried off.
“Well, Colosso,” said Zia Concetta as she sliced the onion in half, “buona fortuna.”  The Mysterious Giant took an onion half in each hand, once more stepped off the pedestal, and strode of to meet the army.

Three miles outside the city the Mysterious Giant sat down by the side of the road and held the onion pieces close to his eyes.  Big tears began to run down his cheeks.  The giant made loud sobbing noises.

What a sight the army saw as it came over the hill!  “Halt,” shouted the captain.  The army halted.  “What is that?” the captain whispered to one of his lieutenants.

“It looks like a giant boy – crying,” answered the lieutenant.  “Well, we’ll see about this,” said the captain, marching off to where the Mysterious Giant sat.  “I am Captain Minckion,” the captain declared.  “We have come to destroy this town.  Who are you, and what are you doing here crying?  No tricks now – answer me!”

“Oh, sir,” said the giant, sobbing, “I’m sitting out here, away from the town, because the other boys in school won’t let me play with them, They say I’m too small.  They pick on me all the time.  They call me names, like minuscolo and dobole – ‘tiny’ and ‘weakling.’  I’m always the last one chosen for games.  Today they told me that if I tried to go to school they would beat me up.  I hate being so small.”

The giant sniffed loudly and blew the hats off the soldiers standing in front.  The captain and the army stood dumbstruck.  If this giant was a small boy that the others teased, then imagine what the rest of the people of this town were like.
“But someday sir,” the giant bellowed, “someday, I’ll show them.  I’m going to eat up all my pasta, and I’ll grow big and strong, and then I’ll be able to fight back.”
The soldiers began to back away, trembling.  The lieutenants gathered around the captain, who backed away from the giant, too.  There was only one thing to do.  Captain Minckion and his lieutenants drew their swords.  They held them in the air and shouted . . .
“About-face!  Double time – march!”  The army turned and fairly ran in the opposite direction of Barletta.  The Mysterious Giant threw way the onion halves, dried his tears, and went back to the Church of San Sepolcro.

“They’re gone,” shouted Zia Concetta to the townspeople, as the giant climbed back on his pedestal once more.  “The army is gone.  You can come out now.  The town has been saved.  Our giant did it!”

Che bella festa!  What a celebration was held that night!  But when it was over and the moon was high in the sky, the Mysterious Giant looked out over the sleeping town.  Doves cooed themselves to sleep on his head and his shoulders.  Everything was calm, everything was still.  Zia Concetta opened her window.

Storyteller, Game Designer, Facilitator, and Social Media practitioner who believes that technology, intent and the Agile methodology can change the world. He is the founder of The Kahani Project and also the co-founder of Epiphany Learning (www.epiphanylearning.co.in)