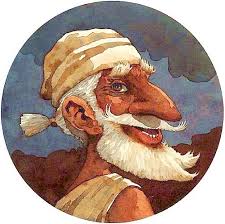 The Gifts of Wali Dad is a folk tale of India and Pakistan. Wali Dad is a simple and generous grasscutter. He is content with his modest living conditions and even manages to save money from his meager earnings. One day, he realizes that his savings had filled the pot in which he stored money. Already satisfied with whatever he has, Wali Dad decides to buy a gift to the “noblest lady on Earth” from his savings. However, the gift-giving did not end there and created a tangle in Wali Dad’s life. Wali Dad’s giving nature led him to become a rich man. But what would Wali Dad, a simple man do with all the riches? Listen to the story to find out.

Origin of the story

The story was first written under the title, ‘Story of Wali Dad, the Simple Hearted’ by Andrew Lang. It was published in his book ‘Brown Fairy Tales’ which is a collection of folk tales from across the globe. Lang got the story from Major Campbell who was a British officer stationed in the Punjab of British India. Campbell in turn had heard the story from an Indian. Punjab was later split between India and Pakistan but the story of Wali Dad remains a known tale in both the regions.
Check out the ‘Brown Fairy Tales’ book

About the Illustrator
About the Author