This poem is an apt account of the peace nature projects through her various sounds and colours. The poem focuses on the flora and fauna in mountainous areas. The central character of this poem is the Chaichal Bird, or the yellow billed blue magpie which is found extensively in Himayalan regions.

The poem has been written by Shamli, who lives in Palampur, Himachal Pradesh, India. This poem comes from her personal observation of the Chaichal bird and the flora and fauna around her home.
[/three_fourth_last]

The full text of the poem

The Chaichals sit on a tree,
screaming to their friends;
It seems so amazing,
the way their tail bends.
A grasshopper hopping by,
to say a friendly hello;
It is so teeny-weeny,
its color is yellow.
The clouds are passing by,
feeling very proud;
Nature is so quiet,
yet still so very loud. 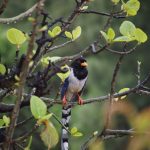 The Chaichal (Urocissa flavirostris)
The Chaichal is a Himalayan bird with a tail twice the size of its body! In Himalayan villages it is locally called Lumpuchhia, which means long tailed. In English it is known as the Yellow Billed, Blue Magpie. The Chaichal is a very noisy bird! Though it has many different ways of calling, and often imitates other birds, it sounds more like a scream, than a song. It eats not only fruits and seeds, the way other birds do, but also eggs and other little creatures. The Chaichal is mostly found in west to east Himalayas, and also in my backyard!