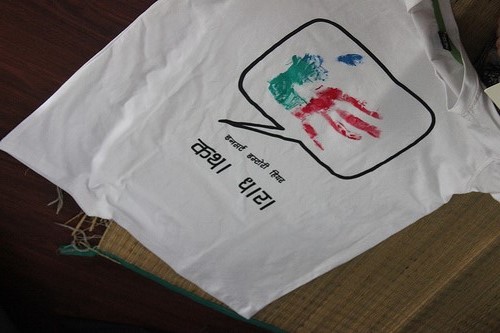 Every so often one finds themselves in a suspended reality. One where the imagination of their mind holds hands with the beauty of the world and soars towards creating a whole new universe. Sometimes it is a daydream, sometimes it is a poem, a short-story, a film, a song or even a painting.

But what if when your imagination begins to awaken and you have no place to let it play? To let it slide down the slope of emotions and inspiration? To let it be the see-saw between the fight of good versus evil? To let it swing on the ropes (made of a million threads) of possibilities.
The Kahani Project and the Open Space jointly created one such playground for the imagination. Located in our beautifully bustling city of Pune, Open Space is a haven for thinkers, library for readers and documentary watchers (/and theatre for watchers), hall for debaters and on the Saturday12th it was a sandbox for the creativity of 25 individuals. They entered as students, entrepreneurs, chefs, accountants and left as story-tellers.
(If Open Space served as the playground, Katha Dhara was the game for the day.) Katha Dhara invited participants of all ages and different walks of life to come together, co-create stories and bringing them to life. All in a span of 3-4 hours.

How do you get a room full of strangers to collaborate and build a story worth telling?

Simple, Give them 4.52 minutes to speed network with each other, feel the others’ vibe and pick team members. Let instinct guide them, rather than intellectual constraints – much like when you just ‘know’ the book is going to be great based on a synopsis. With 4 groups of 5 people each, the creative process was a go. A group which would later choose to narrate the story of a snail and a gardener, chose to, very fittingly, sit in the balcony. Surrounded by low hanging branches, beads of sunlight squeezing their way through the thick overgrowth and leaving a trail across the pages on which a child drew illustrations, all along being closely monitored by a pair of Mynas who occasionally tweeted their opinions.

Inside the mood was transient as one walked across the thatched rugs, moving from one group to another. If you listened carefully, you could hear the whispers of ideas out of which greatness is born, the clash of opinions and attitudes out of which creativity rises, the laughter out of which camaraderie is forged.

Where one group debated over existential issues and an imaginary world another debated over how two children can be taught the age old value of sharing. A corridor filled with research journals led you to a room where there brewed a story of a village where kindness was created and spread through simple acts of care, concern and humanity.

Interspersed with 30-second wind down sessions, snacks and candy breaks and guidance towards story building, character formation and team work the entire exercise finally led the participant to the final stage and point of the morning – Story Telling.

For those there, the suspension of reality came in the form of oral narrations, skits and songs. Complimented by props such as hand illustrated placards projecting characters and backdrop elements, mimed objects such as the sun and a banyan tree and hand painted t-shirts which the actors donned, the four performances touched base with the sight, sound, mind and soul of each individual. Each watching, wide eyed and with the openness of a child.

Every playground has a secret hiding place, ever story a fascinating surprise (/twist). The fifth story of the afternoon was born in a room far away from Open Space and in another time. The final participants of the morning narrated their tale over the interweb and how! Sometimes a story of a lion told through a 15 inch screen, a video conference and a mobile phone is all one needs to put a smile on the faces of 30 strangers. A session of introspection and insights ended the afternoon. Discussions about the process of building something, working with strangers towards a united goal but with varying opinions and projecting one’s own characteristics onto one’s creations left the group with some food for thought and a story to tell!

What is the point of this you may ask?

(Well,) Every so often you need to find a space, alone or in the company of another, where you can leave the world at the door way, let inspiration and introspection seek your imagination and create something wonderful out of nothing. Then step out and let the world experience what you have created. Narrate it, show it, peacefully, humbly and always with an open mind.

I created this morning. I brought them together and made something magical come alive. This is my story. This is my creation. I am Katha Dhara

P.S. – In case you want to re-create this experience for others, here are some guidelines.

A note from the The Kahani Project:

How will the stories be used: