“Feeling the Drawing – Drawing the Feeling”

‘Adventures with the Touching Slate’

This is a story about learning to draw and learning to see. It was the weekly storytelling session on 25th August conducted by The Kahani Project at Poona Home and  School for the Blind in Koregaon Park, Pune.

A 7-year-old was very happy with his creation that day. He told my friend Monika, “Someone told us that the blind cannot do two things – Drive and Draw. Today we could draw.”  This was the magic that all of us co-created that day. This is what this story is about.

Our assumptions are our boundaries. Nothing is more empowering to me than one more assumption breaking. Drawing with the touching slate broke down many of them for all of us that day.

This story begins when Arvind Gupta from IUCAA Science Centre shared with us how the visually impaired can use the ‘Touching Slate’ as a learning aid. We decided to try it in our Sunday Storytelling Session. What happened in process follows. Complete To-do Pdf is here. DIY Video Thanks to Arvind Gupta. Explore more of his stuff. [/half_last]

What is a touching slate?

[/half] [half_last class=””] Touching slate is a concept to use Velcro and wool to create a drawing, which the visually impaired can use by touching and feeling to ‘draw’.
The Slate is made using Velcro and cardboard. A wound string of wool serves as the ‘ink’ in the ‘pen’.

The pen draws the string of wool that sticks on the Velcro to create a tactile drawing.
[/half_last]

It began by Shalaim and Sneha scouring the old city market to find one odd Shah Popatlal who provided them the Velcro. Rest all materials were mostly found lying around at our homes like the “rubber chappal”, which we used for making the base of pen, except for the adhesive*(fevibond) which we found at the local stationery. We began making the slates and pens, in a park inside Ajay’s Housing Society on the Sunday Afternoon. New designs and ideas for how to make the pen the better would keep on emerging and everyone was enjoying the creative process.

Monika continued with her R&D of finding better designs for the pen. Sneha was trying to get us efficient in our use of adhesive and Sonia was trying to get us to use more of it so that the slate lasts longer.­  Shalaim, Nicholas, Ajay and I were trying to finish the work avoiding all these distractions. We eventually discovered the best design for crankshaft, the rubber bases and the right amount of adhesive.

[half class=””] We caught the attention of the society children passing by. They were curious about what these adults were trying to make on a Sunday evening in their park. To my surprise, They understood the concept quicker than I did. Therefore, we asked them to try it out and do a quality-check. They gave thumbs up to our slate, adding that it would be a ‘super interesting thing’ to any kid.
[/half] [half_last class=””] [/half_last] 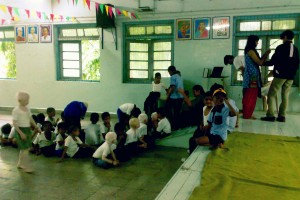 The Sunday Session began with the story of The Lion and The Mouse being told in Marathi. After which all of us discovered how to use the pen and slate together. This was a very interesting process, because to my surprise, these kids did not really have a concept of pen and slate. Hence, kids who could partially see were first to start, as they perhaps would have seen a pen before.

Their amazement with this new toy reminded me of the joy I had when I first saw a computer.

Monika and Sonia drew the Mouse and the net from the story of ‘Lion and the Mouse’ which all the kids touched and understood their shape. Some of them tried to draw it on the slate.

Next, we listened to the poem Nani ki Nav. After which each kid drew one object, which they remembered from the poem.

The stories that we shared:

We did not have Slates for everyone; thus we were sharing them in groups. However, as the kids waited for their turn, some of them were sitting very peacefully but excited about what was going to happen.
This intrigued me; I couldn”t remember myself or any of my friends sitting so peacefully in any class. Either we got or too eager to let everyone have his or her chance. We wanted to skip past all what the teacher would say. They were mostly boring. But it was different here. 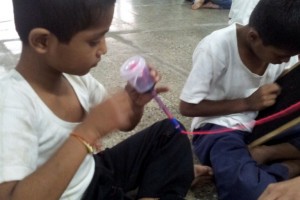 It reminded me how being confident with my five senses and no stimulus to look beyond I get used to what is around me. But because they are constantly aware that there is something which they can’t really be aware or ’see’ they are eager to discover it. An aura of mystery hangs over which increases curiosity. One could know from the look on their face that how they were trying to listen to every small thing and imagine what was happening around them.

They were obviously very much in the present, more than how much I could ever imagine myself being in.
They would touch and feel what person before would have drawn and then make their drawing.
I was a new person to the school but the warmth and excitement with which they welcomed me was really touching. Instead of standing far and waving, they came around holding my hand and hugging me.

Reminds me of a quote from the novel Little Prince,

“What makes the desert beautiful,” said the little prince,””is that somewhere it hides a well…”

Thanks to Ajay, Monika, Sonia, Sneha, Shalaim, Nick, Uddhav and the amazing kids of Poona Blind School for co-creating this magical experience.

– Madhur Anand
Everything is recycling stardust.

Khoji. Swaraj University. Storyteller on a mission to open his own imagination. Traveller to lesser known places and roads. Using film and words to share.