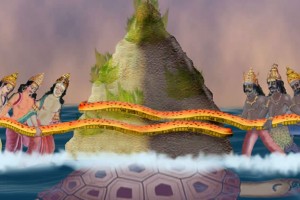 Description from Wikipedia
Hindu mythology also contains a story about the churning of the Cosmic Ocean in order to obtain Amrita – the nectar of immortal life. At the suggestion of Vishnu the gods, (devas) and demons (asuras) churn the primeval ocean in order to obtain Amrita which will guarantee them immortality. To churn the ocean they used the Serpent King, Vasuki, for their churning-string. For a churning pole they use Mount Mandara placed on the back of a Great Tortoise – the Kurma Avatar of Vishnu. As the gods and demons churned the sea, a terrible poison issued out of its depths which enveloped the universe. The devas and asuras approach Shiva who took the poison into his throat and swallowed it. Shocked by his act, Goddess Parvati strangled his neck and hence managed to stop it in his neck and prevent it from spreading. However, the poison was so potent that it changed the colour of his neck to blue, thereby earning him the name of Neelakanta (blue-throated one).[3] When the Amrita finally emerged along with several other treasures the devas and asuras fought over it. However, Vishnu in the form of Mohini the enchantress manages to lure the asuras into handing over the Amrita to her, which she then distributes to the devas. Rahu, an asura, disguises himself as a deva and tries to drink some Amrita himself. Surya (the sun-god) and Chandra (the moon-god) alert Vishnu to this deception. Vishnu then decapitates Rahu just as he is about to swallow the nectar, leaving only his head immortal.

According to Bhagavata, the outcome of the churning of Ksheerasagara is Halahalam (terribly destructive poison), Amrita (nectar) with Dhanvantari (physician of Gods), Lakshmi (Goddess of Riches), Jyestha (Goddess of Poverty), Chandra (the Moon), a white elephant named Airavata, a horse named Uchchaisrava, Kalpavriksha (the tree that yields whatever is desired).

The Churning of the Cosmic Ocean (the Milky Way) is told in several ancient texts, notably in the Valmiki”s Ramayana Canto 45 [4] and in the Mahabharata.[5]