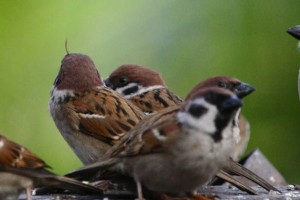 The sparrows are ready to go out foraging for food. The party includes mama sparrow, uncle sparrow and aunt sparrow along with the four young sparrows who have just learnt to fly. It’s a big day today as they will be foraging outside their nest for the first time and the entire flock is going to a nearby field. But, the news is that a young boy, with a sling and stones in his hand, has been dispersing birds from the field.

The sparrows muster courage and go to the field nevertheless. Tragically, one of the young sparrows is hit by a rock flung by the young boy. The entire family escapes the field leaving the little sparrow behind. Back in their nest, the other sparrows feel remorse for their injured sibling. They fly back together to rescue their sister. After a long search they meet an old woman and are relieved to find that she has rescued their little sister and has been tending to her. The sparrows are surprised to discover that the same humans who hurt and kill can also save and protect. This is rather amusing to them. But, why does the old woman save the bird? Listen to the story to find out. 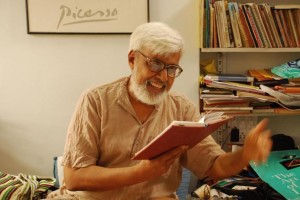 Dr. Anil Awachat (Devanagari: अनिल अवचट) (born 1944) is a doctor, a social activist and Marathi writer from Maharashtra, India. Awachat was born in 1944 in the town of Otur in Pune District. He completed Pre-Degree education from Fergusson College and later received his medical degree from B. J. Medical College in Pune in 1968.

Dr. Awachat and his psychiatrist wife Sunanda founded a deaddiction center in Pune, called Muktangan (मुक्तांगण), which was the first of its kind in India at that time. The center has been a highly successful operation. Dr. Awachat has written extensively on social issues in India and through his writings sought justice for the helpless segment of the society. He has been an editor of Sadhana (साधना) magazine.