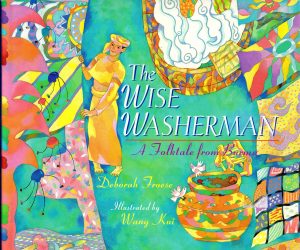 Aung Kiang is the best washerman in his town. He is hardworking and he “worked magic in his washtub, for he made white clothes gleam like snowcapped mountains and colorful clothes sparkle like jeweled pagodas.” However, this does not sit well with his neighbour Narathu. As a way to get Aung Kiang arrested, he plans an elaborate scheme where Aung Kiang is presented with an impossible task by the king. Aung Kiang is supposed to wash the king’s grey elephant and make it as white as a mythical white elephant.

Listen to this Burmese folktale in Hindi and find out if Aung Kiang was as intelligent as he was hard working to get out of the trap set by Narathu.

About the Author – Deborah Froese
About the Burmese festival of Thingyan