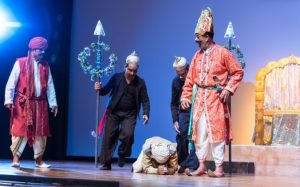 Aguru and a disciple stop at a city for alms and food. When the disciple goes to the city market to
buy food, he is surprised to find that everything there from milk sweets to leafy vegetables was sold at the same price! While the Guru immediately realized that it was not wise to live in such a lawless nation ruled by a foolish ruler, the disciple decided to enjoy a little more time in the land of cheap treats. However, in a bizarre turn of events, the disciple soon finds himself in front of the noose, ready to be hung on the king’s order. Listen to the story to find out how the Guru tries to trick the foolish king and whether he is able to save the disciple.

More on the Story

Initially penned down by Bhartendu Harishchandra on the ghats of Varanasi, in 1881, Andher Nagri is one of the most popular Hindi plays today. Over the years, it has translated in to a movie, poems and stories in different languages. Andher Nagari and Chaupat Raja has become a metaphor for political recklessness and the story has been repeatedly adapted to humorize and talk about political chaos in current times.